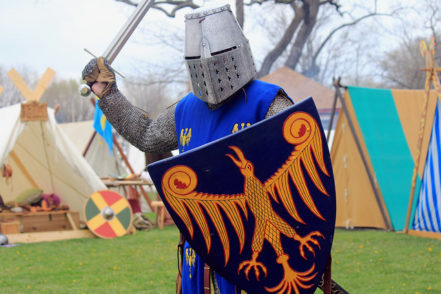 British participation in The Crusades was comparatively minor. Each of the Crusades was called for by a Catholic Pope, either to help Christian allies under threat of attack, to boost the Pope’s standing, or to lay Christian claim to Jerusalem. The first call to action was in 1095 and the series ended in defeat in 1291.

The promise of lifetime forgiveness for sins enthused thousands of men to make the journey to the east Mediterranean. Today they might be called mercenaries. It was the Third Crusade (1189-92) in which Britain played its most conspicuous part, both by giving funds to the Knights Templar and by King Richard I ‘the Lionheart’ (1157-99) sailing down to Palestine himself. He succeeded in conquering a large chunk of land but not the city of Jerusalem.

Nevertheless, this interaction with the Arabs and the Saracens (Muslims) gave us many new skills, knowledge and techniques, mathematics being the most important. Banking systems and heraldry were devised to meet the needs of crusaders, exciting stories of their exploits were added to the literature and numerous new loanwords were absorbed into English.