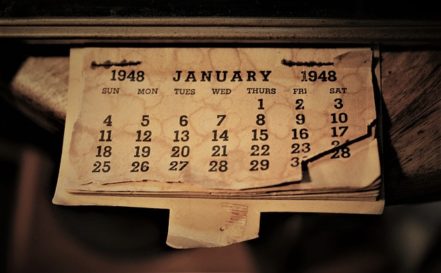 In 1582, Pope Gregory XIII decreed that all Catholic countries should swap over to a new calendar, which became known as the Gregorian calendar. This was based on accurate observations of the planet’s solar orbit. Previously, Europe had been using the Julian calendar, named after Julius Caesar, but dates had drifted by an accumulated ten days over the centuries, due to a slight error.

Britain and its colonies did not adopt the Gregorian calendar until 1752, passing the Calendar (New Style) Act in 1750. Not only did this involve adjusting the date to lose those ‘extra’ days (eleven by then), but, at the same time, the government decided to switch New Year’s Day from the traditional 25th March to 1st January. This meant that 1752 was a short year in Britain, as it ran from 25th March to 31st December, with 2nd-13th September missing.

Incidentally, this is why our tax year ends on 5th April ~ the ‘extra’ days were simply added on to the previous date for the end of the year. It is also little known that leap years do not necessarily occur every four years, as this algorithm shows:-