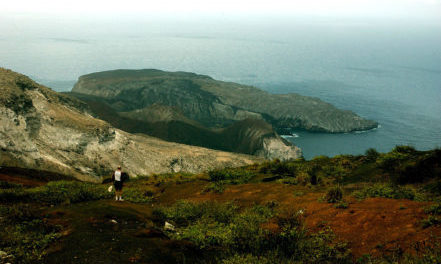 Ascension Island, grouped with St. Helena and Tristan de Cunha islands, is one of fourteen British ‘overseas territories’. It is the tip of an underwater volcanic system in tropical mid-Atlantic, naturally arid with almost no native vegetation, and was once home to millions of sea birds.

The British were the first people to settle there in 1815 and Charles Darwin (1809-82) visited in 1836. His friend, the botanist Sir James Hooker (1817-1911) made his own trip there in 1843 and on his recommendation, trees and shrubs started to be imported from 1850 onwards in order to make settlement more feasible.

Today, the Island is dominated by a USA military airbase along with various tracking, transmitting and listening stations. In 1982 the Island suddenly hosted an immense increase in traffic, both airborne and maritime, when it became a stopping-off and refuelling point for those involved in the Falklands Conflict.

There is so much that is strange about this island, as this BBC article explains. It is not currently possible to fly to Ascension as a tourist other than from Johannesburg via St. Helena once a month and with a valid entry permit.