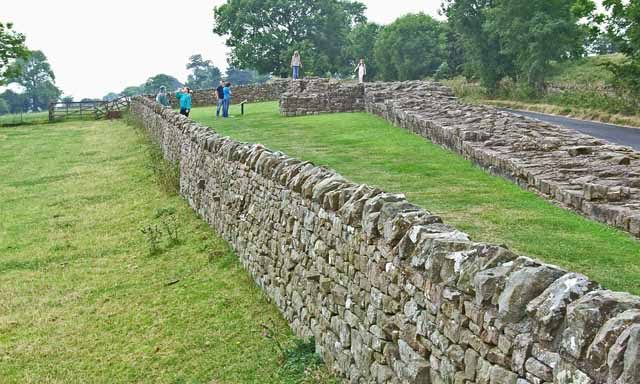 Hadrian’s Wall was constructed in the 2nd century and stretched 73 miles from the east coast (at appropriately named Wallsend) to the west coast of northern England. It marked one of the borders of the Roman Empire and it took at least six years to build. Parts of it can still be seen today ~ at Birdoswald, for example, which has the longest remaining stretch of the Wall.

Publius Aelius Hadrianus (76-138) was one of the more stable Roman Emperors and his policy was to consolidate the Empire’s territories rather than expand them as his predecessor had done. He was crowned in 117 and visited Britain 5 years later. It is unclear whether the Wall was already under construction amidst rebellions and raids from the “barbarians” in Scotland, or if it was this visit that prompted Hadrian’s decision to build. A fairly recent discovery of an engraved artefact suggests that the Wall was called “vallum Aelii” (rampart of Aelius), confirming the connection with Hadrian.

Most of the Wall was of stone but some of it was turf. The remains give only a tiny impression of the enormous structure that it once was, with many forts, gateways and living quarters for soldiers, families and traders.