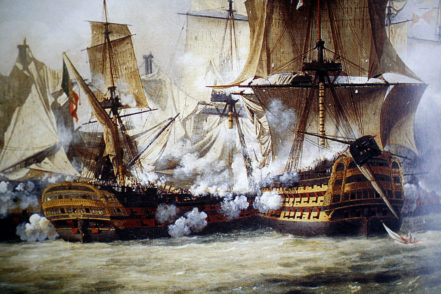 The Battle of Trafalgar was won under the inspired leadership of Admiral Lord Horatio Nelson and, after he was shot dead, Vice Admiral Cuthbert Collingwood. It took place on 21st October 1805 off the coast of Cape Trafalgar in south-west Spain and was both a show of naval supremacy and a dismissal of Napoleon’s plans to invade England.

Nelson, a brave patriot, sent the message to his side: “England expects that every man shall do his duty”. Sailing in HMS Victory, he led twenty-seven British ships and not one was lost. His French and Spanish opponents had two-thirds of their thirty-three ships either captured and plundered, or destroyed. The Battle took five hours and was distinguished by a daring new strategy, typical of Nelson’s style. Instead of going head-to-head along a line, he went at right angles in two columns.

The bicentennial was celebrated in 2005 by various events, including the A30 from Falmouth to London being dubbed ‘Trafalgar Way’. This was to mark the journey taken by the messenger who had the first news of the victory and Nelson’s death. Trafalgar Square in London was so named in 1830 and Nelson’s Column, standing 169ft. 3in. high, was completed in 1843.