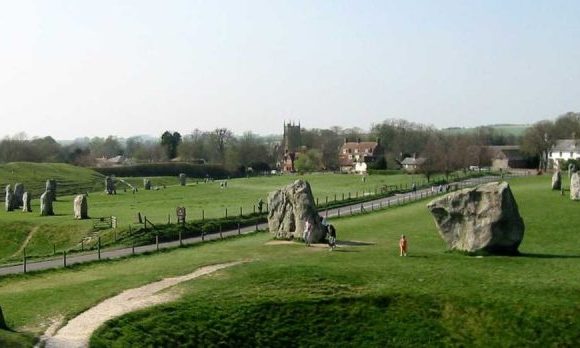 The Neolithic stone circles at Avebury, Wiltshire, were among many hundreds of such circles in Britain. There are numerous theories as to how they were built and what they were used for, including the idea that they match certain features on Mars…

At Avebury there is a massive henge with a stone circle placed just inside its perimeter. This is Britain’s largest stone circle, having a diameter of over 1,000ft.. Inside that circle were two smaller circles but not much remains of these. At least one of the stones weighed over 100 tons.

It is thought that there were ninety-eight stones originally at Avebury. However, in the early 14th century and again in the late 17th/early 18th century, spates of religious zeal saw local people destroying them. One man was crushed to death under one of the stones as it fell and he was not able to be given a religious burial. It was this event which halted the first bout of destruction.

Inside the henge is the very picturesque 400-year-old Red Lion pub.