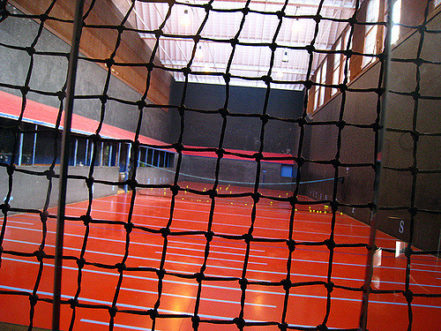 Real tennis, or just ‘tennis’ to its aficionados, came long before lawn tennis, but is a rather niche sport today. It is played in Britain, Australia, the USA and France and there are fewer than fifty professional courts, twenty-seven of which are in Britain. The world’s oldest tennis club still in operation is The Leamington Tennis Court Club, which opened in 1846 and offers real tennis amongst its exclusive facilities.

Played indoors with handmade solid balls and wonky wooden rackets, the score words are the same as in lawn tennis ~ love, 15, 30, 40, deuce, advantage ~ and there is a net in the middle, but it requires more agility than its younger off-shoot. It also has a handicap system which rates ability so that players at different levels can still play each other.

Tennis was popular in the sixteenth century and King Henry VIII was renowned as a skilled player, with courts built at Hampton Court Palace. It declined in the era of the Puritans but there was a revival in the nineteenth century. This was halted, however, by the invention of lawn tennis in the 1870s. This is when it became ‘real’.