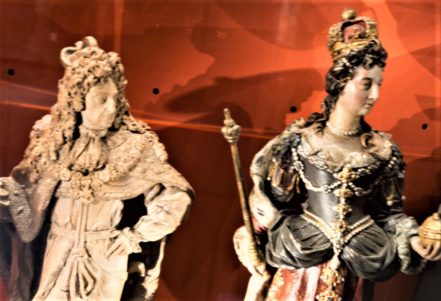 “And whereas it hath been found by experience that it is inconsistent with the safety and welfare of this Protestant kingdom to be governed by a popish prince…” ~ Such had been the terrible wrangles between Protestants and Catholics in British history that this “experience” eventually resulted in the Declaration of Rights of 1689 banning Catholics from ever taking the throne. This was one result of the Glorious Revolution of 1688-9 which saw a Catholic king removed and Parliamentary sovereignty put in place.

The ‘glorious’ revolution involved no battles. Indeed, seven noblemen invited the new joint monarchs in. They were William III of Orange (1650-1702), a ‘stathouder’ in The Netherlands and nephew of the deposed Catholic King James II & VII (1633-1701), and his wife Mary II (1662-94), James’s eldest daughter. Much to her father’s anger, she and William accepted and sailed over to their new home, unopposed. James fled to France.

They willingly agreed to the Declaration which eliminated the possibility of any return of tyrannical rule by monarchy. Parliament now had the power of law-making, the raising of fair taxes, free elections and freedom of speech, and sadistic punishment of offenders was banned. It was the first step to our present constitutional monarchy.