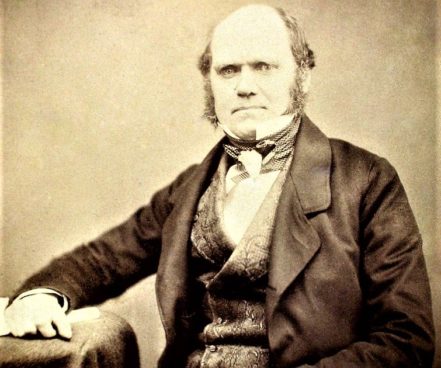 Shropshire-born Charles Darwin (1809-82) had just graduated from Cambridge when he received the exciting invitation to be the ‘gentleman passenger’ on the Royal Navy’s research ship. HMS Beagle. This trip around the southern hemisphere, in which he observed and took specimens of many previously unrecorded species, was the subject of his first book, ‘The Voyage of The Beagle’ (1839).

It provided the foundation for his life’s work. He analysed small in-species variations of birds, such as beak shape, and experimented on plants. For three years he investigated coral reefs. He was halfway through writing up his theory of random variation under natural selection when he received Alfred Wallace‘s essay on the same subject. This prompted him to focus on finishing his book, ‘On the Origin of Species’ in 1859.

In ‘The Descent of Man’ (1871) Darwin proposed his theory of the evolution of one species by the mutation of another, specifically man from ape. This dented religious beliefs and led to the rise of ‘scientific materialism’. However, new techniques in genetics and paleontology show that the theory is impossible, but Darwin’s theories are still heralded as a breakthrough for their time, even if his ‘big idea’ was somewhat off-kilter.