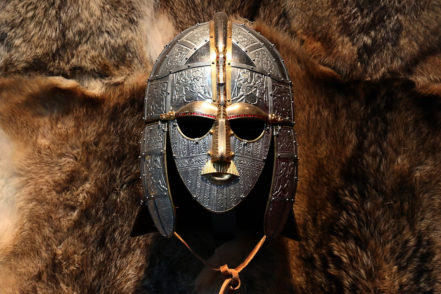 In 1938-9 Basil Brown carried out a series of archaeological digs in Sutton Hoo, Suffolk, on a group of Saxon-style (or arguably British-style) burial mounds. Two of these contained ships and the largest revealed an unspoilt treasure trove of gold and silver tableware, weapons, armour and coins from the 7th century. It is assumed that a ‘ship burial’ was afforded to a king or other important person (as opposed to a ‘boat burial’ for, say, a warrior).

From the imprints left by the rotted timber and the position of the rivets, Brown could see that the ship was 90ft by 14ft, the largest ever found. It had been hauled up from the nearby river and put in a long trench. A chamber had been built in the centre to house the coffin and precious goods. Everything was then buried under a mound of soil. No sign of a body remained because the acidity of the soil had completely dissolved it, experts say.

The famous Sutton Hoo helmet was pieced together over several years and is now the iconic symbol of the find. It can be seen in the British Museum with other Sutton Hoo artefacts.