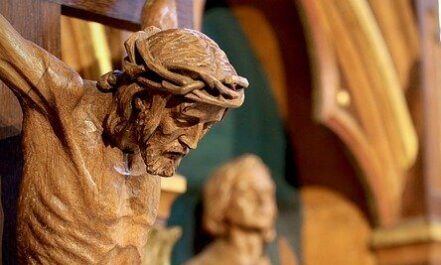 Good Friday is the Christian commemoration of the death of Jesus by crucifixion. It is also the first day of the Easter long weekend comprising Good Friday, Saturday, Easter Sunday and Easter Monday, with the Friday and Monday being Bank Holidays. Devout Christians regard Good Friday as a solemn day of repentance and its part in the Resurrection Story is the fundamental basis for Christian beliefs, and its outcome ~ the forgiveness of sins ~ is the reason it is called ‘Good’.

The New Testament recounts the events. Jesus had gathered his disciples together for the Last Supper and though he dreaded what was about to happen, it was essential to prove his preachings. Jesus was arrested but not found guilty of any crime. However, the baying mob intimidated the prosecutor and Jesus was subjected to barbaric treatment before being nailed to a cross. His slow, agonising death was a sacrifice in which he symbolically paid the price for mankind’s sins, thus enabling redemption.

Traditionally, Christians would not eat meat on Good Friday since it represented warm-blooded flesh, so instead they would eat fish, being cold-blooded (unless they were vegetarian). This became customary for all Fridays, hence the saying “fish on Fridays”.