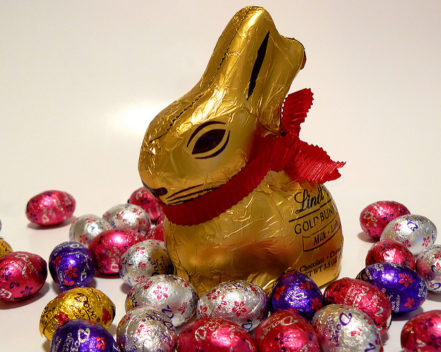 Easter Sunday falls on the first Sunday after the full moon after the spring equinox, which means that most people do not know the date until they receive their new diaries! It follows Lent and is a Christian celebration of Jesus’s resurrection, but consider those phrases ~ ‘full moon’,  ‘spring equinox’ ~ and it will become apparent that its origins are pagan.

The name ‘Easter’ is thought to derive either from ‘Ēostre’ or ‘Ishtar’, both pagan goddesses and there were already centuries-old pagan stories of divine resurrection linked to springtime. Early Christians merged several pagan celebrations into their own practices, including Easter. Rabbits, chicks and eggs symbolise fertility and birth, though some Christians rather cheekily claim that hollow Easter eggs represent Christ’s empty tomb!

The Persians and Egyptians were the first to paint the eggs’ shells and the English company, J.S. Fry & Sons, produced the first chocolate eggs as a commercial venture in 1873. Aside from the Easter Sunday religious services, some of which are held at sunrise in pagan mode, there are Easter Egg Hunts for the children, lots of chocolate consumption and a national holiday the next day, Easter Monday.