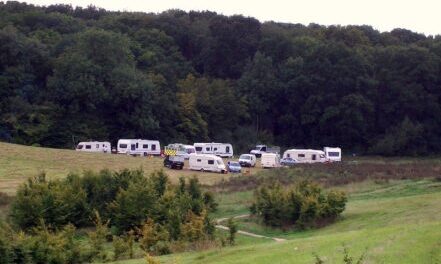 The UK’s Gypsy, Roma and Traveller (GRT) community is roughly estimated at 120,000-300,000 people. They have the poorest life outcomes of all the minority groupings, with the shortest life expectancy, lowest educational attainment, more health issues and a high crime rate leading to over-representation in the prison population.

The sudden arrival of GRT caravans, trucks and cars on public parkland is almost always greeted with police visits and dismay from neighbouring householders. To tackle the problems of discarded rubbish and invasion of amenity space, local councils provide facilities in designated spots around their districts, but these may already be occupied or insufficient for a particular travelling group.

GRT families will often stay long-term if someone is old, ill or completing school exams, and many now opt for permanent bricks-and-mortar, though this may never feel quite ‘right’. Apart from New Age Travellers originating from the 1960s’ hippy culture, GRTs have a centuries-old history. Some came from northern India via Europe and it is said that people thought they looked ‘Egyptian‘, which morphed into ‘gypsy‘. Their nomadic way of life was well suited to seasonal farmwork, for example. They were skilled in various manual trades and crafts, but these are more regulated today.