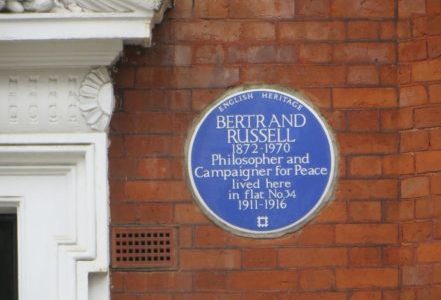 For a man who excelled in, adored and taught mathematics, it was an amazing recognition of his wide-ranging intellectual output in print for Bertrand Russell (1872-1970) to be awarded the Nobel Prize in Literature in 1950. He wrote more than seventy books, bringing the elegance of mathematics, logic and philosophy to a broader audience, as well as posing social, moral, political and theological questions for us all to ponder.

Russell was orphaned at three years of age and was home-tutored until he went to Cambridge University in 1890. His grandfather had been Prime Minister twice, for which he was made an Earl, a title which made its way down to Bertrand. He spent most of his working life lecturing at Cambridge but was once fired for his anti-WW1 campaigning.

His philosophical thinking was analytical and incisive, and he is remembered for his thought-provoking talks and essays, including his unswerving logic on the non-existence of God. Here are just two of his innumerable pithy observations:

The whole problem with the world is that fools and fanatics are always so certain of themselves, but wiser people so full of doubts.

To be without some of the things you want is an indispensable part of happiness.