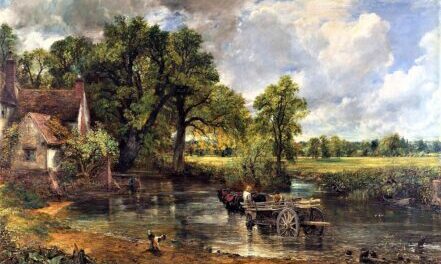 The oil paintings of John Constable, RA (1776-1837) were ground-breaking in their day. He rebelled against the teaching of the Royal Academy of Arts in terms of subject-matter, painting technique and working methods, and was a key figure in the Romanticism movement. Today, his work attracts the ‘chocolate box’ label, but this vastly downplays his talent and pioneering spirit.

Born in rural Suffolk, Constable soon realised his artistic calling. His father supported him financially while he began his prolific output of paintings of the surrounding landscape. After his father’s death his income came from portraits, of which there are over a hundred. Yet his passion was for depicting meadows, trees, cloudy skies, rainbows, cottages, mills, boats, farmwork, streams, rivers and churches, all painted from life rather than imagination.

He was also unusual in making full-size preliminary sketches of his larger paintings (‘six-footers’) such as his most famous, ‘The Hay Wain’ (1821). His French counterparts quickly took to this new style, but Constable vowed never to cross the Channel, so did not develop this fanbase himself. Instead, he enjoyed his eventual election as a member of the Royal Academy in 1829 and continued painting until his sudden death in his London studio at age 60.