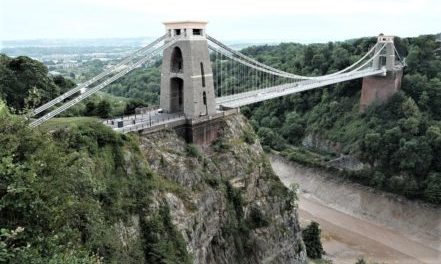 The Clifton Suspension Bridge in Bristol was initially designed by the celebrated engineer, Isambard Kingdom Brunel, in 1830, when Brunel was only 24. Due to various financial problems, there were many interruptions to the building schedule and it eventually stopped with only the end towers completed.

Brunel died in 1859. Two other engineers ~ William Barlow (1812-1902) and Sir John Hawkshaw (1811-91) ~ brought the design up-to-date and the Institution of Civil Engineers raised enough money to have the bridge’s construction re-started. Chains from Brunel’s bridge at Hungerford, which was being demolished, were purchased for re-use and the Clifton Suspension Bridge was finally finished in 1864.

It is, perhaps, Bristol’s main tourist attraction. It is 702 feet long and 249 feet above the high-water level of the River Avon below.