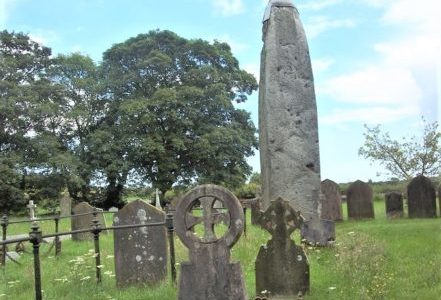 The British Isles are strewn with hundreds of ancient standing-stones ~ huge stones that appear to have been deliberately placed upright in the ground ~ and the Grade I Listed Rudston Monolith is the tallest of the lot. It measures seventeen feet around the base and twenty-five feet in height, which may be mirrored underground. A Christian church was built next to it and the awe-inspiring stone would have had a dreadful story of divine punishment attached to it.

Rudston village in Yorkshire is one of the country’s oldest settlements and the monolith stands on a small hill in the centre of various archaeological finds. It consists of gritstone, indicating that it was brought to Rudston, either by a glacier or a team of strong men from Cayton Bay, ten miles away, where gritstone could be quarried.

Theories on the purpose of standing-stones include the following:-