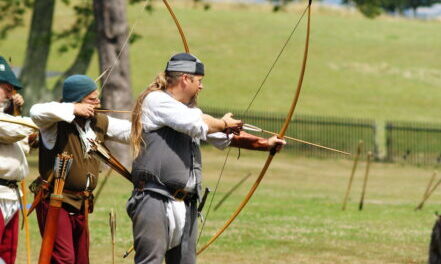 European and British monarchies’ intertwinement led to an incongruous English claim on parts of a disunited France in the 14th and 15th centuries. Five successive generations of Kings and nobles squabbled and fought, mainly on French soil, over French titles and land. The term ‘The Hundred Years War‘ is shorthand for many skirmishes and battles throughout this period, which were to spawn a pride in nation on both sides of the Channel.

It began in 1337 when the French King Philip VI confiscated the English possession of Aquitaine in south-west France, a royal inheritance which had long irritated the French. The English King Edward III (1312-77) successfully used his valid claim to the French throne as a bargaining chip in the ensuing hostilities and was given not just Aquitaine but other regions too. Many years of gains and losses followed, bringing confusion and unrest to the French people.

Battles won by the English included Agincourt in 1415, an overwhelming victory. Eventually, the French were inspired by a young woman, Joan of Arc, to pull together, repel the intruders and support their King. Despite another English-French royal marriage, the English left in 1453 with just the town of Calais still under their control, held until 1558.