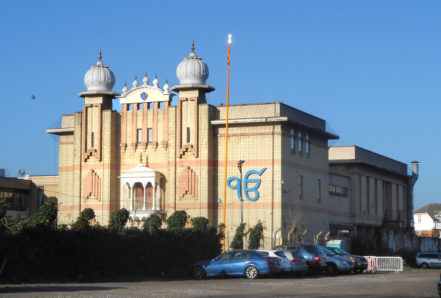 Most of the first Sikhs in the UK arrived from India and East Africa in the 1950s/60s. They settled mainly in London and the Midlands. Southall’s ten Sikh temples (gurdwaras) include the largest one outside of India. There are currently around 420,000 Sikhs in the UK.

Followers of the Sikh religion believe that there is one abstract god (waheguru) and all humans are equal. Indeed, the first of their ten successive founding Gurus in the sixteenth and seventeenth centuries pioneered women’s equality. The Gurus wrote the Sikh scripture ~ Sri Guru Granth Sahib. Sikhs value the family, education, work, security, charity, courage, justice and peace. This makes them admirable members of society, though they were faced with some hostility in the UK initially.

The wearing of the turban by Sikh males and some females makes them easy to spot, which is intentional. They are not permitted to cut their hair, as it is a ‘gift’ from waheguru. Hospitals have guidelines to follow for Sikh patients and Sikhs are exempted from wearing motorcycle helmets and hard hats (except where it would be life-threatening not to do so). Sikhs are also legally allowed to carry a symbolic dagger (kirpan).

(Top image of a gurdwara in Hounslow: Des Blenkinsopp at geograph.org.uk / CC BY-NC 2.0)