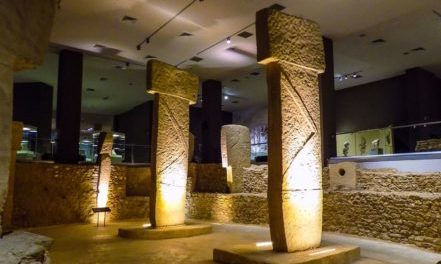 Edinburgh-born Graham Hancock (1950-) grew up in India and studied at Durham University. He is an investigative journalist and author whose 1992 book on the location of the Ark of the Covenant set him on the track of ancient civilisation. He has since spent his life connecting the dots of prehistory, much to the annoyance of established academia who see this as their sole domain. Nevertheless, Hancock’s mission is to encourage further research and much-needed scientific probing of the status quo.

He and his wife Santha, a photographer, spent seven years carrying out more than a thousand scuba dives around the coasts of India, Malta and the Far East. Their book ‘Underworld: Flooded Kingdoms of the Ice Age’ (2002) showed many fascinating stone structures that were submerged after the 400ft. rise in sea level at the end of the Younger Dryas period.

Hancock is anything but an armchair researcher and travels the world to discover clues for himself. His genius is in piecing together peer-reviewed studies in geology, archaeology and astronomy with religious and ancient writings. ‘Fingerprints of the Gods’ (1995), ‘Magicians of the Gods’ (2015) and ‘America Before’ (2019) are his exploration into what caused the last ice age and almost obliterated our technologically-advanced ancestors.