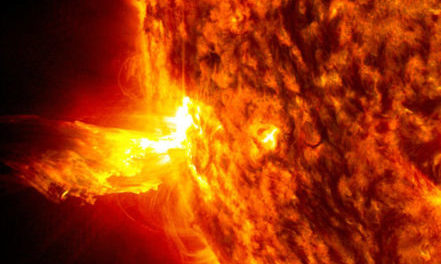 Astronomer and mathematician Thomas Harriot (1560-1621) from Oxfordshire made the first drawings of what could be seen through the newly-invented telescope in July 1609. Naturally these were of the nearest extraterrestrial object: the Moon. By the end of 1610 he had also observed sunspots ~ dark spots or splodges on the Sun’s surface where magnetic activity temporarily lowers the temperature.

Richard Carrington (1826-75) from London was an amateur astronomer keen enough to build his very own observatory on the side of his house in Redhill, Surrey, in the early 1850s. From 1853 to 1861, whenever there were blue skies he would be observing the Sun via its projection onto a glass plate, from which he made drawings. He published his collection of these drawings in 1863.

They included what became known as the ‘Carrington Event’ of 1st September 1859. This was a huge solar storm, or ‘coronal mass ejection’, the brightest of all recorded in current history. It only lasted five minutes but it affected Earth profoundly the following day with bright, colourful auroras in the sky, disruption to telegraphic communications and the occurrence of electrical fires and shocks. Kew Observatory’s simultaneous observation of a magnetic spike proved the link between the Sun and Earth’s magnetic field.