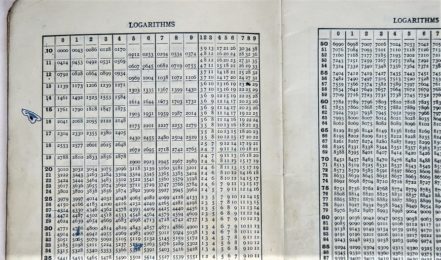 One of the biggest leaps in mathematics was the invention of logarithms by Edinburgh-born John Napier (1550-1617). As a mathematician and astronomer, he was motivated by the time-consuming and error-prone calculation of large multiplications, divisions and the extraction of roots by hand. One of the aids he created was called ‘Napier’s Bones’, a framed set of rods on which multiplication tables were engraved.

The beauty of logarithms is that, being powers, the calculations are transformed into additions and subtractions ~ much easier ~ and the system can be extended to many decimal places with consistent accuracy. Napier also pioneered the use of the decimal point.

No-one knows how Napier formed his ‘logos arithmos’ idea, but after twenty years of development his first ninety pages of logarithmic tables were published in his ‘Mirifici Logarithmorum Canonis Descriptio’ of 1614, translated into English in 1616. They were an instant success and hailed as a godsend by professors and scientists alike. One such professor was Yorkshireman Henry Briggs (1561-1630), Professor of Geometry at Gresham College, London. He immediately visited Napier and they became firm friends. Briggs suggested converting the tables to base 10, Napier agreed and this is the version that went on to be so pivotal for future scientific advancement.