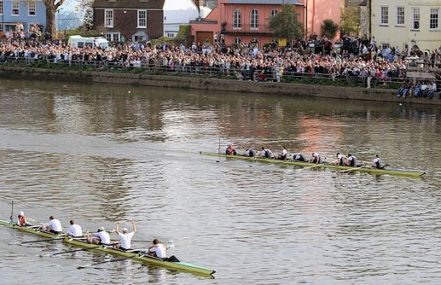 Aside from being Cockney rhyming slang for ‘face’, the Boat Race is a traditional sporting competition between the Oxford University Boat Club (in dark blue jerseys) and the Cambridge University Boat Club (in light blue jerseys). Most of the other UK universities have their own student rowing clubs, but this particular race only involves Oxford and Cambridge and is by far the most famous. Their first race was in 1829 at Henley-on-Thames and Oxford were the winners.

Today it takes place between Putney and Mortlake in London and there are men’s, women’s and reserve team races. Rowers must be currently enrolled on a full-time course, with no scholarship. Training must be fitted in alongside study and during holidays, including Christmas. The race accoutrements, from boots to beer, attract sponsorship and there are partnerships with charities.

The men’s race has been shown live on television since 1938 and the women’s race since 2015. There have been a few mishaps over the years, including collisions, sinkings and attention-seeking individuals. The closest winning margin was 12 inches in 2003:-