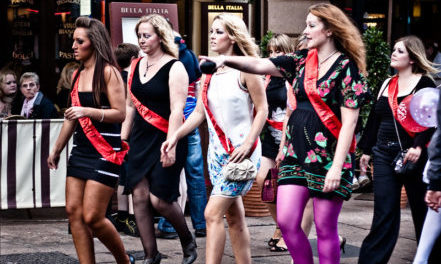 While a husband-to-be can traditionally hold his ‘stag do‘ as late as the night before the wedding, the bride-to-be could not possibly risk looking worse for wear at the big event. Therefore, her ‘hen party‘ takes place at least a week beforehand.

‘Hen’ is a Scots endearment, while a ‘henpecked’ husband is one dominated by his wife. The term ‘hen party’ is a ladies-only gathering and was first documented in 1887, though it really came into general usage in the 1960s. Until then, if the bride-to-be had a pre-wedding celebration it would be a works leaving do, to mark her progression to housewife and future mother. In the new age of female empowerment, many hen parties are almost identical to the male stag do.

It is all down to personal preference. Some brides-to-be will have a meal out, some will have a night in a male stripclub, while others will rent a house for a whole weekend of tipsy hilarity (provided one can be found that accepts hens and stags). It is not uncommon to see hens wearing fancy dress, sashes or T-shirts customised with the name of the host hen, who herself wears a veil or other distinguishing attire.