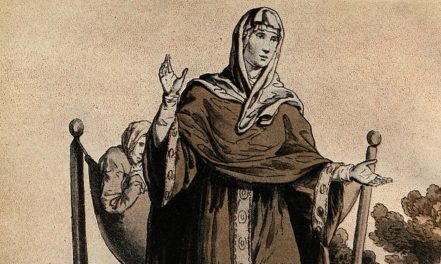 Old English (OE) was spoken from the 6th to the 11th centuries in England and southern Scotland. Many of our most common words originate in OE. It evolved from an existing base with a little influence from the Latin of the Augustine monks who arrived in 597. For example, some of the rounded letters of the Latin alphabet were incorporated into OE.

OE was more complicated than modern English. It had gendered nouns, numerous inflections and the word order was less structured. The remnants of OE poetry appear to show that our ancestors enjoyed playing with the sounds of their language.

There were four dialects: Kentish, West Saxon, Mercian and Northumbrian. Thanks to Alfred the Great, Mercian became the standard, but Northumbrian was the tongue of the early OE poets, including Cædmon of Whitby, regarded as the ‘father of English sacred song’. The following is ‘Cædmon’s Hymn’, written in the 660s/70s:-