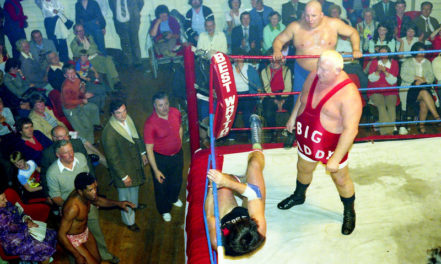 At 4pm each Saturday in the 1960s/70s, millions of fans would settle down to watch ITV’s wrestling slot on their ‘World of Sport’ programme. Although there was the niggling thought that the aggression was fake and the throws had been well rehearsed, it was a spectacle which still managed to raise the hackles and get emotions running.

What began as a sport transformed into an entertainment thanks to the organisers Joint Promotions’ realisation that it was the wrestlers with showbiz images who drew the crowds. With stars like Mick McManus (1921-2013) and Jackie Pallo (1926-2006) playing ‘good-guy-bad-guy’, Joint Promotions received a contract which ran from 1955 to 1988. In came the glitzy capes, masks, shiny jackets, snazzy trunks, body paint and stage names. Audiences allegedly included many vocal grannies, who took the contests very seriously and loved to vent their anger on the bad guys.

However, wrestling on British TV came to an end after two very large men ~ 23-stone Big Daddy (1930-97) and 40-stone Giant Haystacks (1946-98) ~ reduced the athleticism and skill levels drastically, simply flattening their opponents! Wrestling continues today in a much reduced form which seeks to return to the traditional sport. There have also been attempts to put it back on television.