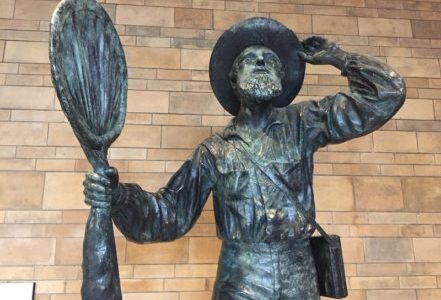 Alfred Russel Wallace, OM FRS (1823-1913) was born in Monmouthshire and showed a fascination for identifying flora and fauna from a young age. This led him to make major explorations of far-flung parts of the world, in which he carried out ground-breaking first-hand observations and discoveries of thousands of species. He also realised, for the first time, that the world is divided into various biogeographic regions, named Wallace’s Realms in his honour. These six regions have only recently been updated to eleven in number.

He spent 1848-52 in Brazil, mapping out the Amazon River and collecting specimens of insects, birds and mammals, many of which were lost when his ship home sank. Undeterred, he then travelled extensively around Malaysia and Indonesia, where he collected 125,660 specimens, of which 5,000 were previously unknown. He noticed the differences in the types of species either side of what is called Wallace’s Line between the islands.

Once in possession of so much data, Wallace then came to the same conclusion as Charles Darwin on the evolution of species by the mechanism of natural selection. In 1858, he sent Darwin an essay on his findings for his opinion, unaware of the similarity since Darwin had not yet gone into print.

(Top image of Wallace statue at the Natural History Museum: Matt Brown at Flickr.com / CC BY 2.0)