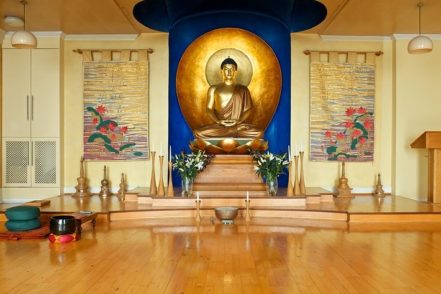 The 2,500-year-old practice of Buddhism first came to Britain from Asia in the late nineteenth century. The Buddhist Society of Great Britain was formed in 1907, followed by The London Buddhist Society in 1924. There was another surge of interest in the ‘Swinging Sixties’ and there are now around 250,000 followers in the UK, with the largest community centred around the Gurkha Regiments in Hampshire.

Its non-evangelical, non-dogmatic and non-exclusive approach means that it can run alongside other faiths and it has a long history of fitting in with different cultures around the world. It is said that Buddhism is more of an understanding of psychological processes than a religion and indeed, in the UK, it is probably best known for offering meditation and mindfulness classes at its centres.

At some temples there are nuns or monks who give teachings, blessings and ceremonies which are adapted to a Western environment. Some of the chants are in English, for example. Most of the sects of Buddhism are represented in the UK and although the common goal is to achieve ‘enlightenment’, each sect has its own preferred ‘great teacher’ or protector, its own rituals and sometimes its own ideas on Buddhist principles such as ‘karma’.