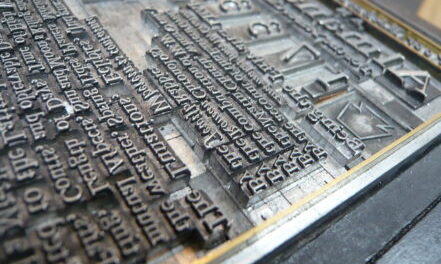 Kent-born William Caxton (c.1422-91) was the first to bring the printing press to Britain and to publish in English. During the twenty or so years that he lived and worked in Belgium, he had seen Gutenburg’s amazing new printing press on a trip to Germany. He saw its great potential for boosting the sales of his English translations of classical literature.

A linguist himself, he was about to revolutionise the English language, since he and his typesetters, many of whom he brought with him, had to decide on the spellings and punctuation of their texts. On their shoulders lies the blame for much of the weirdness that we still have today ~ for instance, the Dutch -gh- and the French -qu-. Sometimes they would add letters or take them away, simply to fit the space available on a line. Furthermore, Caxton would sometimes leave a word untranslated, merely adjusting it slightly to appear English.

Caxton published around a hundred books and was a pioneer of the printing industry. The first ever book printed in English was his own ‘Recuyell of the Historyes of Troye’ in 1473, while he was in Belgium, and his first in Britain was Chaucer‘s ‘Canterbury Tales’ in 1476.