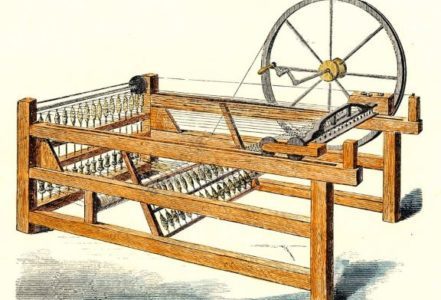 The 8-spindle ‘spinning jenny’ for spinning wool or cotton was invented by James Hargreaves (1720-78) of Lancashire in 1764 and it was an important step towards the Industrial Revolution. At first, some spinners were upset that it was taking away their jobs, but Hargreaves moved to a mill in Nottingham, where he continued to develop his ‘jenny’ (engine). The largest jenny accommodated 120 spindles.

Hargreaves died in 1778 and his wife, who was not called Jenny, nor were any of their daughters, received £400. Hargreaves had not been able to properly establish a patent on his invention, as he filed the application years after others had copied his design. By 1810 it had been replaced by newer machines.