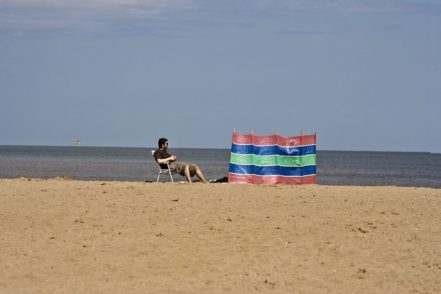 Sir Noel Coward (1899-1973) was a prolific playwright, composer and actor, whose wit shines through all his work. His signature tune was his ‘Mad Dogs and Englishmen’, first performed in 1931. It is said that he created it during a trip through the Vietnamese jungle, without even needing to write it down. It refers to various countries with “tropical climes” where the inhabitants know to keep indoors at the hottest time of day, whereas the “Britishers” do not.

Mad dogs and Englishmen go out in the midday sun
The Japanese don’t care to,
The Chinese wouldn’t dare to,
Hindus and Argentines sleep firmly from twelve to one,
But Englishmen detest a siesta,
In the Philippines they have lovely screens,
To protect you from the glare,
In the Malay states there are hats like plates,
Which the Britishers won’t wear…….

Coward was alluding to the British having a gung-ho spirit to the point of lunacy, but it also illustrates a certain British resistance to adopting local customs in foreign lands. Today the meaning has been rather muddied, so the title is either taken to say that the British stay out sunbathing for too long, or simply that, it’s hot!