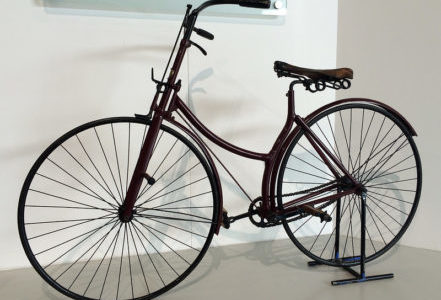 James Starley (1830-81) from West Sussex was the pioneer of the modern pedal bicycle, along with his London-born nephew, John Kemp Starley (1854-1901). The very first bicycle, nicknamed the ‘bone-shaker’, was made entirely of wood, with no pedals at all, resulting in the rider’s footwear being quickly ruined! The Starleys made the design modifications that led to the much more practical and safe version we have today.

James Starley was very mechanically-minded and began his working career repairing sewing machines and he patented several improvements to their mechanisms. It was while he was manufacturing his own models that he started to look at ways to improve a ‘bone-shaker’ brought to him from Paris. He first of all made a four-wheeled version with suspension, in 1865. In 1870 he patented the spoked wheel and made an all-metal bicycle. In 1871 he invented the Penny-Farthing, with a large wheel at the front and small wheel at the back.

He continued upgrading his design, adding pneumatic tyres, a chain, levers, and inventing the differential gear. In 1876 he patented a tricycle used by Queen Victoria. He even made tandem tricycles. His nephew developed the safety features and experimented with adding motors. His ‘Rover’ line eventually morphed into Rover cars.