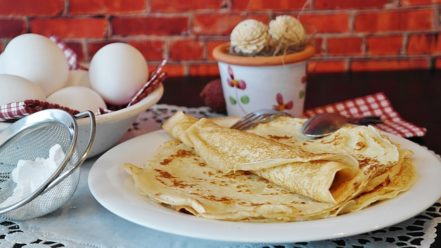 Shrove Tuesday, or Pancake Day, as it is more often called, is the last day before the religious observance of Lent. Traditionally, Lent was a time to be vegan, so non-vegans saw those last few days beforehand (‘Shrovetide’) as a time to use up all their stocks of meat and dairy produce. The French equivalent is appropriately named Mardi Gras, which means ‘fat Tuesday’.

The enjoyment to be had by all on Shrove Tuesday, particularly in the consumption of dairy-laden pancakes, has enabled it to continue being a popular date on the British calendar, even though its roots are in the medieval Catholic religion. As it is dependent on Lent, it is not on a set date but occurs between 2nd February and 9th March.

Pancake races, first recorded in 1445 in Buckinghamshire, epitomise the general merriment that is associated with Shrovetide.