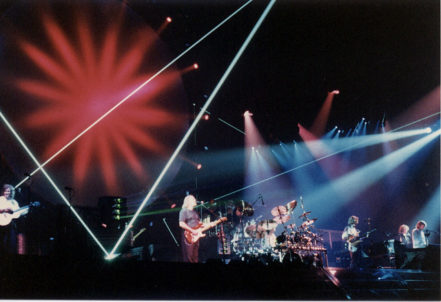 Active from 1965 to 1995, Pink Floyd set the standard for pyrotechnics at rock concerts and were pioneers in psychedelic rock. Not for them the ‘silly love songs’ pumped out by pop stars, their lyrics contained wide-ranging social commentary and whimsy. This began with singles such as ‘Arnold Layne’ and ‘See Emily Play’ from 1967 and continued through ‘Money’ (1973), ‘Another Brick in the Wall (Part II)’  (1979) and ‘Comfortably Numb’ (1980), to name but a few.

They have sold more than 250 million copies of their albums, of which the most successful was ‘Dark Side of the Moon’ (1973). Their long instrumentals and use of new technology put them in the ‘progressive rock’ camp after the ‘psychedelic’ label went out of fashion in the 1970s. The Pink Floyd lifestyle had included large amounts of psychedelic drugs, but their lead man, Syd Barrett, left the group in 1968 with mental health and drug issues, and changes followed.

The group line-up remained stable for a while, with Roger Waters, Nick Mason, Rick Wright and Dave Gilmour, but there were disagreements, leading eventually to disbandment. However, this early video shows the English madcap youthful humour which first brought them together:-