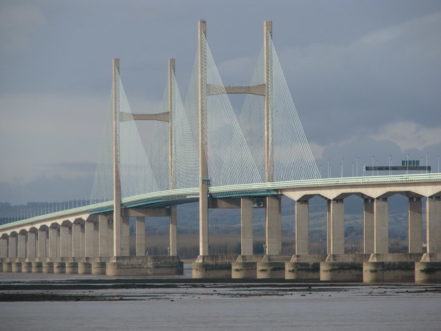 The River Severn is Britain’s longest river and one of the most turbulent, with a tidal range of 40ft. and flow of up to 8 knots. It forms a natural barrier between the southern parts of Wales and England but many bridges have been built over it, the two most successful being the Severn Bridge and the Second Severn Crossing (re-named The Prince of Wales Bridge in 2018).

The Severn Bridge was built in 1961-66 at a cost of £8,000,000, partly to tackle road congestion in the Gloucester area from traffic rounding the river. The Bridge cut sixty miles off the journey and was a vital part of the new M4 motorway. It had tolls on the English side, payable in both directions, initially set at 2/6d (12.5p). Occasionally the Bridge would be closed because of high winds, snow or ice.

The Second Severn Crossing was built at a cost of £330,000,000 in 1992-96 with wind resistance and extra lanes, again to cope with increased traffic. The M4 was diverted onto it and the Severn Bridge became part of the M48. The tolls were in the England-to-Wales direction only and were eventually abolished on both bridges in December 2018.