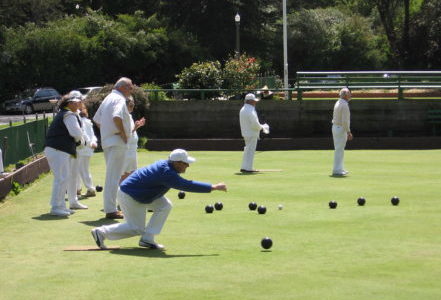 The sport of bowls is centuries old, as evidenced by the well-known story of Sir Francis Drake insisting on finishing his game of bowls before attending to the arrival of the Spanish Armada in 1588. In fact, the oldest surviving bowls club actually dates from 1299 and is in Southampton. Bowls is seen as a gentle sport especially suitable for older people.

A ‘jack’ (small white or yellow ball) is rolled to the end of the lawn, which is either flat for ‘lawn bowls’ or uneven for ‘crown green bowls’. The player rolls a ‘wood’ (a large bun-shaped ball) towards the jack. Each player has two woods for crown green bowls or four for lawn bowls. Whichever wood finishes closest to the jack takes the point.

It is said that the woods acquired the weight bias that makes them curl round as they stop, when in 1522 the Duke of Suffolk split his wood and used the finial from a staircase post instead. Everyone was so enchanted with the curling action that it caught on. The sport was very popular but William Wallace Mitchell (1803-84) from Glasgow drew up the current rules in 1848 to eliminate the undesirable practices of kicking and tripping up!