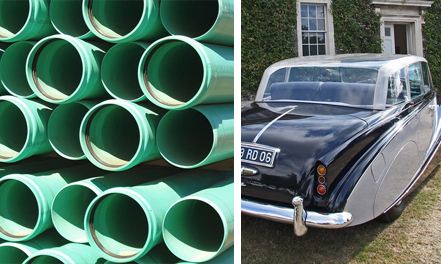 Imperial Chemical Industries (ICI) was once the UK’s largest manufacturing company and from the 1930s to the 1960s its Plastics Division was a hub of innovation, some by design, some by accident (e.g. polythene). Other departments were also involved in producing new plastics that are still in use today, such as Perspex (ICI brand name).

In 1931 Dr John W.C. Crawford (1901-87) of the Explosives Division devised a synthesis (later known as the Stevenston Process) that led to the first commercial production of clear, tough PMMA sheets, named ‘Perspex’ in 1934. He had developed research from ICI’s Dyestuffs Division ~ an unlikely combination at first glance.

In 1933 Eric Fawcett (1927-2000) and Reginald Gibson (1902-83) at ICI’s Cheshire plant, found a white waxy  substance resulting from one of their explosive experiments in which they heated ethylene and benzaldehyde to 170°C in high pressure. This was the first polyethylene (a.k.a. polythene) synthesis but their work was halted by safety concerns.

However, in 1935, ICI colleagues including Sir Michael Perrin (1905-88) and W.R. Dermot Manning (1903-84) resumed the project with better equipment. Another fluke, whereby oxygen leaked into their ethylene mixture, created a white powder which was more amenable to mass production. Its insulation properties enabled the first airborne radar in WW2.

(Images: pipes by publicdomainpictures.net and 1956 Rolls Royce with perspex sunroof by Brian Snelson at Flickr.com / CC BY 2.0)