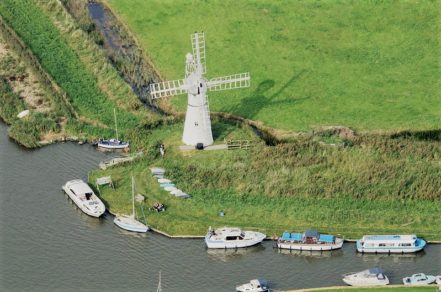 The Norfolk Broads comprise an area of rivers, dykes, streams and lakes in the easternmost part of England. The city of Norwich lies to the west and the coastal resort of Great Yarmouth to the east. The Broads, or ‘Broadland’, has been a popular holiday destination since the turn of the twentieth century, encouraged by an 1882 guidebook by G. Christopher Davies (1849-1922), in which he extolled the delights of slowly boating along its 200-mile network, admiring the scenery and wildlife.

The waterways were previously used for transportation of goods inland, but this gradually ended with the advent of the railways. Today it is possible to hire all types of motor cruiser, yacht, houseboat and dinghy to explore its freshwater routes and the sight of disused windmills is a reminder of their commercial history.

Broadland itself is evidence of historic land use. Norfolk was densely populated in the twelfth century and its peaty layers were dug out for fuel. This continued for two centuries, re-shaping the land as it did so, but it stopped when floodwaters came in. This factor was discovered in 1952 by ecologist Dr Joyce Lambert (1916-2005).  Furthermore, this video shows how cyclical flooding affected Broadland even before that time:-

(Top image of Thurne Dyke drainage mill on the Broads: John Fielding at Flickr.com / CC BY 2.0)