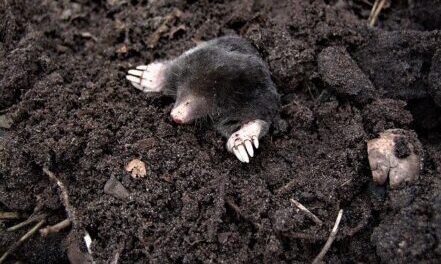 There are two schools of thought about our estimated 41,400,000 moles and their underground activities. One is that they are a nuisance for disturbing the roots of crops and the smooth vista of golf courses, sports pitches and manicured lawns. The other is that they aerate the soil, provide drainage channels and eat the grubs that would otherwise attack crops and horticultural specimens.

Our one species of mole, a fossorial mammal, is present in England, Wales, mainland Scotland and a few of the small islands. It lives 3-4 years. It measures around 6″ long and is a master digger, making a tunnel network over a large territory which it patrols alone (apart from when mating), scurrying to pick up worms and insects that fall in and put them in its food store. Its dark, velvety fur can lie both ways to aid reverse speed.

It was thought that moles have two thumbs on each of  their broad front paws, but recent research has found that the ‘extra’ one is actually an elongated growth from their wristbone and has no joints. However, it does have a special type of haemoglobin to cope with low oxygen and high carbon dioxide levels in its underground home.