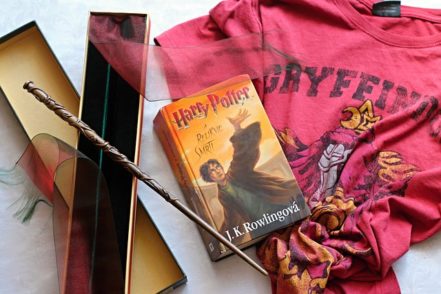 The ‘Harry Potter‘ series of seven fantasy novels was written by Joanne Rowling (pen name J.K. Rowling) and has been a phenomenal success worldwide, with many fans still eager to indulge in the many spin-off products. The first novel was published in 1997 and the last in 2007. The series has set a global best-selling record of over 500 million copies, with the final novel achieving a staggering 11 million sales in its first day. It has been translated into 80 languages, including American English.

The concept famously came into its author’s head on a slow train journey in 1990. It combines all the classic features of British young adult literature ~ an orphan hero, a boarding school, dark forests, coming-of-age, romance, death, magic, scary adventures and surprise. It is set in Scotland at the Hogwarts School of Witchcraft and Wizardry in a parallel dimension.

The Harry Potter brand includes ‘loot crates’, clothing, studio tours, a theme park, a play, back-story books, websites, toys, games and films. Rowling became the first billionaire author but she has given a lot to charity. Some literary critics have been somewhat taken aback by her success, but she undoubtedly skilfully gave age-old tropes a fresh, contemporary airing.