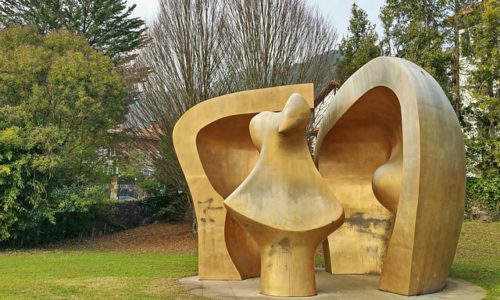 Yorkshire-born Henry Moore (1898-1986) was the most acclaimed, prolific British sculptor of the twentieth century. His creations can be seen in thirty-eight countries across the world in art galleries, museums and outside public buildings. Moore took inspiration from natural forms and preferred to see his sculptures in a countryside setting, which he achieved at his own 72-acre Hertfordshire home, now open to the public every summer.

Moore was also influenced by art from other cultures, including the Aztec, Sumerian and Mexican. In his early works he used the themes of mother-and-child and the reclining nude repeatedly, always in an abstract, radical form borrowed partly from constructivism, surrealism and primitivism. His first sale was to London Underground in 1928. The 1930s were his creative peak, but a mother-and-child sculpture of 1937 outraged the public. He was forgiven when he became a war artist in WW2.

His sculptures became much in demand post-War and he had to employ talented assistants to keep up. His techniques changed to faster methods and critics saw a falling-off in his ideas, which was perhaps inevitable. His wealth made a Henry Moore Foundation possible, which supports upcoming sculptors with grants, resources, study programmes and exhibitions.