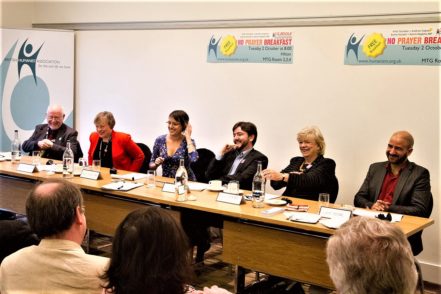 Humanism in the UK is a collection of atheistic ideas promoted by an organisation which began as the Union of Ethical Societies in 1896, then became the Ethical Union in 1928. In 1967 it was re-named the British Humanist Association and from 2017 it has been Humanists UK. They have 70,000 members but claim that millions of Britons share their anti-religious views.

Whereas religion has been an integral part of British history and culture, humanists would like to see it disentangled from our institutions and national ceremonies. They are against having the Established Church, faith schools, Religious Education lessons and religious school assemblies. They would like bishops removed from the House of Lords and for there to be no religious privileges, laws or courts. They are also campaigning for humanist weddings to be recognised throughout the UK.

Instead, they believe that innate and learned human morals and self-control are sufficient to glue a decent society together. These lives are one-offs and humanists support having the choice of euthanasia. They do not believe in any after-life or spirituality and life’s sole purpose is to seek happiness. Humanists have no faith in what cannot be seen; only in what is proved by logic, reason and evidence.

(Image of a ‘No Prayer Breakfast’ organised by the British Humanist Association: Andrew West at Wikimedia Commons / CC BY-SA 3.0)