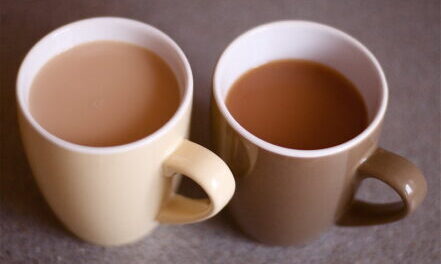 The British solution to most situations is ‘a nice cuppa tea‘! No matter how flustered, exhausted, worried or upset someone is, a cup of tea is generally thought to be the thing to offer and, sure enough, it does seem to calm the nerves and refresh the mind. Millions upon millions of cups are drunk every day in the UK, the vast majority of them brewed from individual tea bags rather than from loose tea in a teapot.

It is strange to reflect that before we became a nation of tea drinkers in the mid-1700s, our favourite beverages had been ale and gin. The timing of this transition was propitious since clear heads were certainly required to operate the new machines of the Industrial Age. However, the factory ‘tea break’ later caused some dispute, with employers wanting to ban it while trade unions claimed it as a right to be enjoyed at least twice a day.

Elevenses, afternoon tea, high tea, teatime, tea gardens, tea shops and tea dances are all products of our tea affinity. Although four cups a day is considered optimal, many people consume a lot more and each cup can bring that customary sigh of relief.