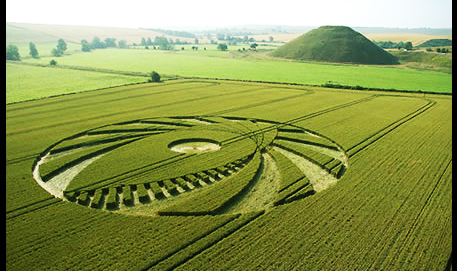 The ‘crop circle‘ phenomenon began in the 1970s on the farmlands of south-west England, particularly in Wiltshire. It continues to this day. A great number of them are created by pranksters using ropes and boards to flatten the crops of wheat, barley or oil-seed rape. The stalks are snapped at the base, making this activity a costly and stressful one for the farmers.

However, there are some crop circles ~ or crop formations ~ that are equally stressful but more of a mystery, since there is evidence of extreme heat or electro-magnetic vibrations having been applied, causing chemical changes in the stalks. They do not snap at the base, but stretch and bend.

Most of the designs are mathematical and some investigators have said that they are expressing messages to mankind, either from the planet Earth itself or from the extra-terrestrials that are said to be visiting it.