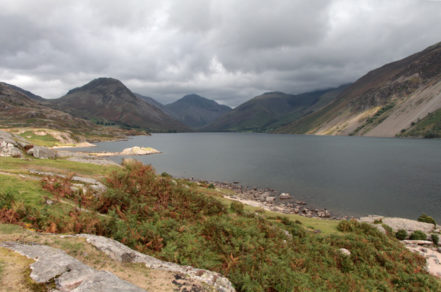 The Lake District is in Cumbria and is a World Heritage Site. It is the second largest national park in the UK at 885 sq. miles and its many mountains, dales, lakes and reservoirs attract fifteen million tourists every year. The landscape, formed by glaciers in the last Ice Age, inspires artists, poets, writers and photographers.

It was the poet William Wordsworth’s ‘Guide to the District of the Lakes’ of 1810 which first caught the attention of the public and a programme of railway and road building followed. It has also been an area of valuable mining industries. Slate, copper, gypsum, iron-ore, graphite and coal have all been extracted.

Although it is called the ‘Lake District’ (or ‘Lakeland’), only one of its bodies of water has the word ‘Lake’ in its name ~ that being Bassenthwaite Lake. A few are called ‘-mere’ (Old English for ‘lake’), such as the largest lake of the District, Windermere. Many are called ‘-water’ and others ‘tarn’ (Old Norse for ‘small lake’).