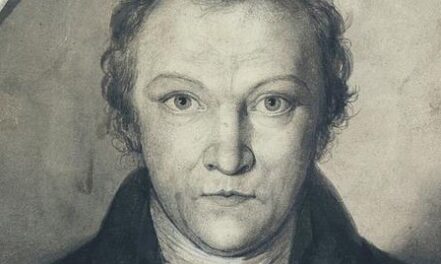 In his time, William Blake (1757-1827) was viewed by some as a nutcase. It was not until a generation after his poverty-stricken death that his poetry and illustrations received acclaim. By then, of course, Blake’s habit of seeing spiritual visions and of recounting conversations he had had with ‘the other side’ did not loom so large in the mind when considering his work. Indeed, he is now deemed a revolutionary genius in terms of imaginative literature, and the New Age movement of the 1960s held Blake in high esteem.

He lived in London, a city he loved, for all but three years of his adult life. He left school at age 10 and started work as an engraver at 14. He continued in this trade, working at home using a printing process he devised himself which printed both text and illustration in one pressing rather than separately.

His most famous poem, ‘Jerusalem’, was set to music during WW1 and it is regarded as England’s anthem. ‘The Tyger’, ‘Auguries of Innocence’ and ‘The Dance of Albion’ are other well-loved examples. They evoke imagery that may have seemed eccentric in the early 19th century but appeals to those contemplating life’s meaning two centuries later.