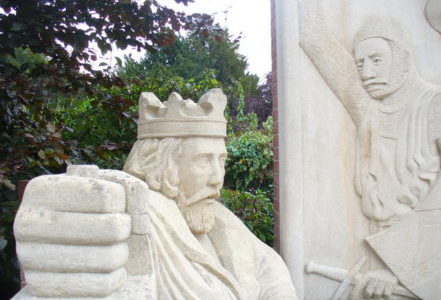 King John (1166-1216) has two claims to fame: as the usurping Prince John of the Robin Hood legend; and, as King, putting his seal on the parchment copies of Magna Carta Libertatum (‘the Great Charter of Liberties’) of 1215, held up as the foundation of modern democracy. In fact, King John only agreed to Magna Carta under duress and almost immediately had it annulled by the Pope, who considered England part of his papal territory.

King John was facing rebellion by the English Barons, who were fed up with him seizing their lands and demanding ever higher taxes for disastrous wars in France and his brother Richard’s Crusading exploits. Magna Carta made little difference to King John’s conduct, but it placated the Barons for a few weeks.

Magna Carta was re-issued by successive monarchs who took it a little more seriously. A copy of the 1297 version is held in the National Archives in the USA and another in Parliament House in Australia. The 1215 version can be seen at the British Library, Salisbury Cathedral and Lincoln Castle. As a contract with the people, it is outside of Parliament’s remit and cannot be repealed.