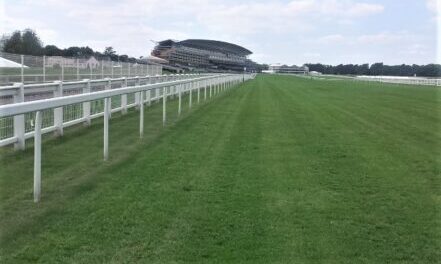 It was Queen Anne (1665-1714) who, in 1711, spotted Ascot Heath’s potential for horse racing and arranged for the first ‘Ascot races’ on this piece of Crown land, next to Windsor Great Park in Berkshire. These were very popular; even more so after King George IV (1762-1830) expanded and improved the spectator facilities. The annual ‘Royal Ascot‘ week became a glamorous top-notch social highlight. It is also the most prestigious flat racing event on the calendar.

For five days every June, around 300,000 well-turned-out visitors don their hats, suits and best frocks to enjoy the atmosphere and catch a glimpse of the Queen in the daily horse-drawn royal procession. A multitude of helicopters, limousines and coaches descend upon the 179-acre venue and a massive catering operation clicks into gear, during which some 120,000 scones and 2,650lbs of clotted cream are consumed, along with 56,000 bottles of champagne. The third day is unofficially known as Ladies’ Day, every milliner’s dream.

The royal connection is reflected in the names of the races ~ the Coronation Stakes, the Diamond Jubilee Stakes, the Queen’s Vase and the Commonwealth Cup, for example. The Queen’s own horses regularly participate and she has had many successes, including the filly ‘Estimate’ winning the 2013 Gold Cup.