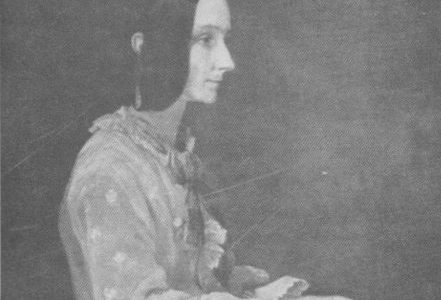 Ada Lovelace (1815-52) was the daughter of Romantic poet, Lord Byron, who left their home when she was five weeks old and never saw her again. He died aged 36, as did Ada. The portrait above was painted in her last months even though she was very ill. In her short life, in which she had been immersed in the mathematical world, she discovered the potential of computing machines and was visionary in conceiving of processes being represented by numbers. In 1843 she published the first computer program, which tracked variables and introduced the all-important loop.

Since 2009 there has been an ‘Ada Lovelace Day‘ on the second Tuesday of October. It is a day to celebrate the contribution of women to science, technology, engineering and mathematics. Ada was described as an ‘enchantress of numbers’ by the father of computing, Charles Babbage, who encouraged her to publish her ideas. She referred to herself as a ‘bride of science’, indicative of how devoted she was to her vocation.

Alan Turing was later to learn from her writings during his work on the development of computers in the 1930s. The ‘Ada’ computer programming language, still in use today by the USA military, was named after her.