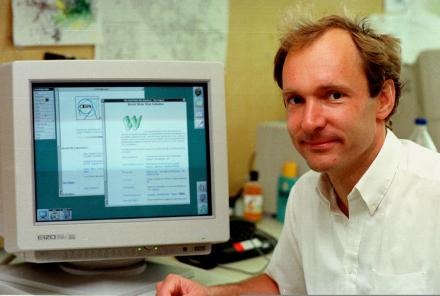 Sir Timothy John Berners-Lee (1955-) is responsible for helping to usher in the digital age with his revolutionary invention of the World Wide Web. Born in London to parents who themselves were computer scientists, Berners-Lee graduated in physics at the University of Oxford in 1976. Whilst there, he constructed his first computer using an old television set.

He then went into the computing industry, including a stint at CERN in Switzerland. By the time he returned there in 1984 with a Fellowship, it was clear to him that a program was needed to facilitate easier communication and sharing of documents among the thousands of CERN employees, associates and partner organisations. He proposed a global hypertext system in 1989 and devised the ‘WorldWideWeb’ program the following year.

The TCP/IP protocol had already been developed in the USA, but Berners-Lee came up with the first server ~ with a handwritten warning note adjacent to the switch ~ the first browser and editor, http, html and much of the web jargon. He made the world’s first website, at info.cern.ch. Knighted in 2004, he has received many distinguished awards. He is now involved in institutes which “advance the open web as a public good and a basic right“.